Combining the divine flavors of chocolate and cinnamon with a delightfully crunchy sugar topping, this Chocolate Cinnamon Bread is insanely delicious!

Believe it or not, this scrumptious and straightforward bread is superior to a donut!

I recently crafted a Cinnamon Sugar Bread to rave reviews from my children, and I found myself eagerly devouring the two remaining slices. The cinnamon swirl featured inside was simply magnificent, yet it couldn’t compare to the crunchy topping that completed this delectable treat!

After devouring the loaf, I was left wishing I had used chocolate–despite being an unreserved enthusiast of cinnamon cake donuts, and this bread tasted like them.

With a hint of cocoa powder in it – my mind wandered to thoughts of churro recipes with their signature chocolate sauce!

So I didn’t hesitate I went ahead and made another loaf of the Cinnamon Sugar Bread and this time added in some cocoa powder. Yum!

And it came out just how I had imagined. Now I am half tempted to add a chocolate sauce but that may put some of you over the top. Or would it?

I love churros and anything with a crunchy cinnamon topping reminds me of them, maybe that is why I love this Chocolate Cinnamon Bread so much.

As I bit into the first of three slices, a wave of nostalgia came over me. How could it be that Starbucks had Chocolate Cinnamon Bread? This was no ordinary dessert; this treat from the past must have been crafted in some special and secret place!

I can still recall my days living in Downtown Denver and walking to Starbucks every morning for a Venti Mocha Latte and occasionally, Chocolate Cinnamon Bread.

Although it’s been nearly two decades since I last had this treat, one bite of the scrumptious bread instantly brought me back to those fond memories.

My kids are in awe of my baking skills, they did suggest adding some chocolate chips. They love chocolate, a trait that I obviously imparted to them! Needless to say, we all have an undeniable passion for chocolate.

What’s fantastic about this Chocolate Cinnamon Bread is that it makes a fun breakfast or brunch item but also great to serve as a snack or dessert.

I love recipes that I can use for a variety of purposes and you can guarantee that this Chocolate Cinnamon Bread will make an appearance at potlucks and barbecues this summer too.

This recipe for chocolate cinnamon bread is a delicious treat that everyone can enjoy.

The main ingredients for this recipe include flour, butter, sugar, milk, eggs, cinnamon, and, of course, chocolate. Each ingredient contributes to the overall flavor profile in its own way.

How do you make chocolate churro bread?

Preheat oven to 350 degrees. Grease a 9x5x3” loaf pan with butter and set aside.

In a small bowl, mix together 1/3 cup of sugar and 1 tablespoon of cinnamon to create the perfect sweet-spicy blend. Then, set aside as you prepare for baking!

In a medium bowl, mix together 1 cup of sugar, flour, cocoa powder, baking powder and the remaining teaspoon of cinnamon. Sift together to combine.

Whisk the egg, milk, oil and vanilla extract together in a separate bowl until blended. Gently fold the wet ingredients into your flour mix with hands until all components are unified.

Gently pour half of the batter into the prepared loaf pan and sprinkle generously with a delightful blend of cinnamon and sugar.

Place in the preheated oven and bake for 45 minutes or until a toothpick inserted in the center comes out clean.

Cool loaf pan on cooling rack for 10 minutes, before you remove to cool on a baking rack. You can serve immediately or let it cool and serve later.

Don’t forget to pin this recipe to your favorite Pinterest board for later. 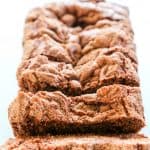