They might look simple, but these churro rice krispies treats are, hands down, my most favorite recipe to date. I mean, I love all of my recipes but the combination of one of my favorite cereal bars with the cinnamon-sugar goodness of classic churros – well, it’s a match made in heaven!

The inspiration started with one of my favorite cookies from Crumbl Cookies: the churro sugar cookie. I love them so, but they pack a serious calorie punch (800!) so I thought, why not take the idea and turn it into a rice krispie treat? So, I took that inspiration and borrowed a few ingredients from my dulce rice krispie treats to create this whole new version.

I knew I could cut the calories but still have all of the flavors of my favorite cookie combined with the crispy cereal and ooey-gooey marshmallows.

Beyond that they combine my favorite Spanish donut and cereal bars, they are so easy to make. Just five ingredients!

They also take no time at all. In about 10 minutes you’ll have a pan of the most amazing rice krispie treats ever.

There’s cinnamon mixed into the bars, but I also add a cinnamon-sugar topping which really makes them so much like a churro. It’s the perfect topping for the marshmallow bars.

Combine the cereal and cinnamon in a large bowl. Set this aside while you melt the butter and marshmallows.

Place the butter in a large pot and melt it over low heat. Add the marshmallows and stir until they are almost melted. I like to leave some marshmallow lumps so you get those nice gooey pulls when you break apart the bars.

Take the pot off of the heat and add the cinnamon cereal right away. Quickly stir until the cereal is completely mixed with the melted marshmallows.

Transfer the mixture to the prepared pan and press it into an even layer. To keep it all from sticking to your hands, use a spatula to press it into the pan.

Sprinkle the cinnamon sugar topping evenly over the bars. Allow the churro rice krispie bars to cool before slicing.

The key to making the best rice krispies treats is to work fast. Once the butter and marshmallows are melted, don’t wait to add the cereal. As the mixture cools it will be harder to mix.

I think it’s easier to add the cereal to the melted marshmallows instead of the other way around. So, be sure to use a large saucepan or pot that will hold everything when you mix.

Use very fresh marshmallows. Dried out or stale marshmallows will melt, but when they cool your bars will taste stale and won’ have that wonderful gooey marshmallow texture.

Store them in an airtight container at room temperature. I like to stack them in layers with wax paper so they don’t stick. They will stay fresh for up to three days.

I’m so thrilled to share these churro rice krispie treats with you! They’re so simple and the best twist on a classic rice krispie bar. If you love churros, you must give them a try soon! XOXO San

Do you love cereal bars like I do? I’ve created other fun variations so be sure to try these easy recipes, too.

Don’t forget to pin these Rice Krispie Treats to your favorite Pinterest board for later. 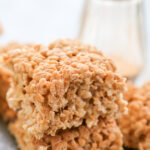 Leftover treats will keep at room temperature for up to three days. Separate the bars with wax paper and store them in an airtight container.