This post was inspired & sponsored by Princess Cruises. All opinions expressed are my own.

The Panama Canal Cruise with Princess Cruises was an unforgettable, once in a lifetime experience, and sailing through the historic Panama Canal was the highlight. 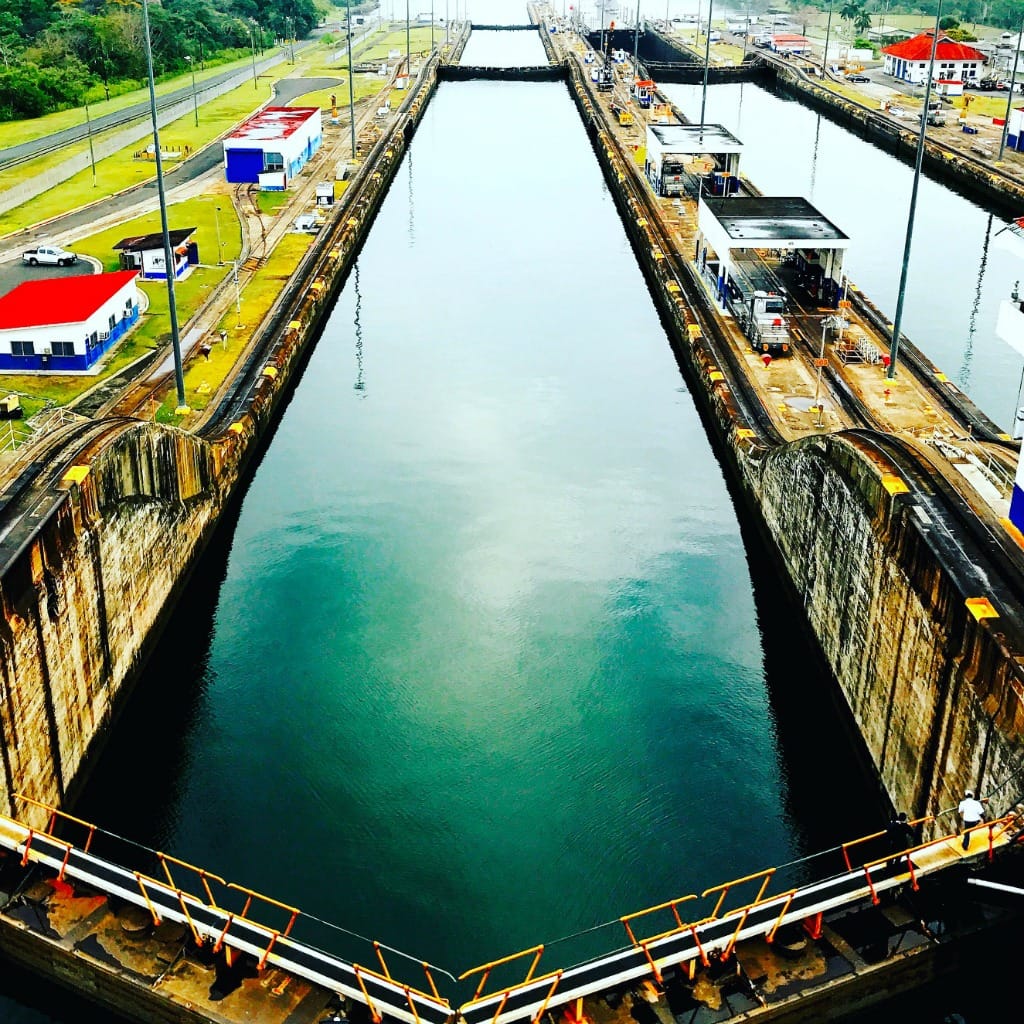 If you have been following A Dash of Sanity on social media or even here on the blog, you already know that last month I returned from a 10-day Panama Canal Cruise with Princess Cruises. I’ve already shared details and inspirations in some posts, giving you some insight to some amazing food, and shared with you details of two of the first ports we stopped at. Here are those posts if you are interested in checking them out: Panama Canal Cruise Ports: Aruba & Cartagena, Colombia | Nutella Donut Recipe | Sheet Pan Pizza

Don’t forget to pin this to your favorite Pinterest board for later.

Today, I’m taking another non-foodie, all-travel approach, sharing my experiences going through the Panama Canal aboard Princess Cruises and the port stop in Colon, Panama. 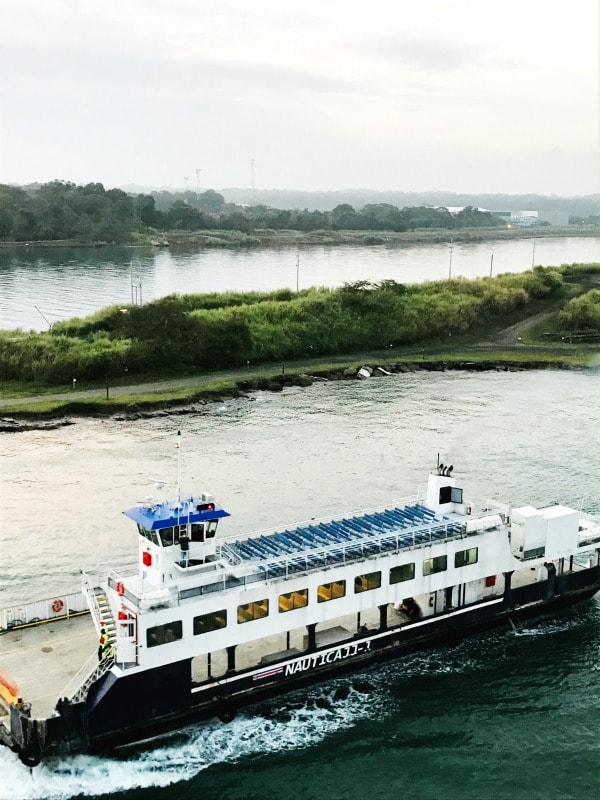 I’ll be honest, I didn’t really grasp the big deal of the Panama Canal until, well, I experienced it. Besides my uncle being stationed in Panama working on the canal for a certain amount of time while I was younger, I’ve really never had any sort of attachment or understanding. The first few days of the cruise, I heard many passengers {mainly the older ones} express genuine excitement about going through the canal, and that it was the entire reason they picked this cruise. I giggled to myself, thinking it must be because of their age. Well, I was so wrong. 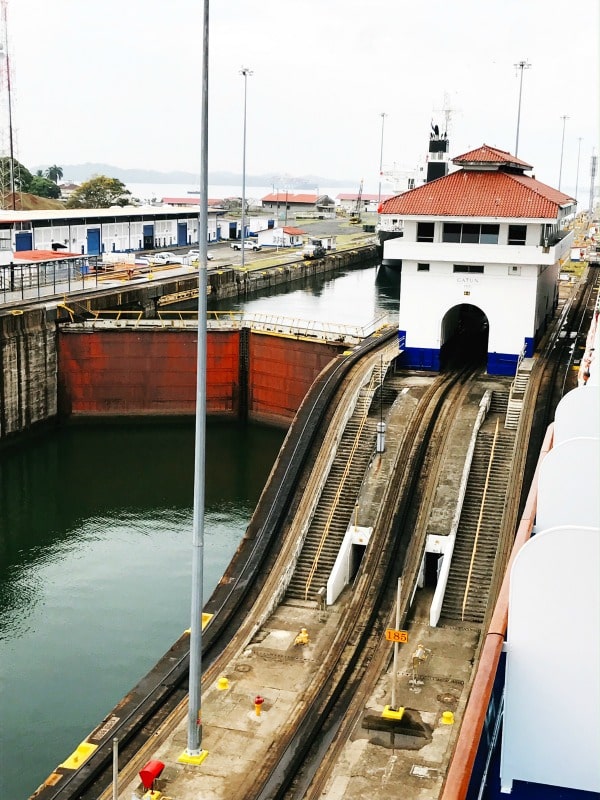 As we approached the canal, I was taken back by the surrounding beauty of the rainforest as the sun was rising. The passengers all started to head to the front of the ship to watch as we entered the canal. Princess Cruises did a phenomenal job broadcasting facts and tidbits of the canal as we approached the first lock. While there are new locks built and soon to be utilized (Princess Cruises will be sailing through those new locks), I loved the old ones. You still had that Old World feeling with little reliance on technology to line up the ship to enter the canal. It took people working together. 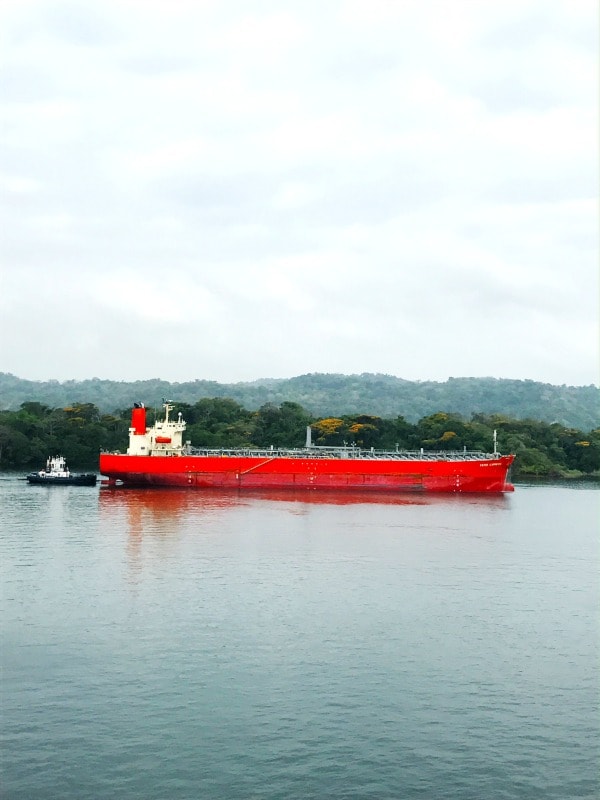 As we entered the first lock, a small boat came out to greet us. And by greet I mean they grabbed ropes from our ship and went back to shore, using them to guide us through the canal and give extra reassurance that we wouldn’t hit on the side. With only 4 ft give on each side, this process was mesmerizing.

Opened in 1914, the Panama Canal stretches 48-miles long, and to me, is one of the wonders of the world. Learning of it’s history and experiencing it for myself, I became completely fascinated by the entire thing. 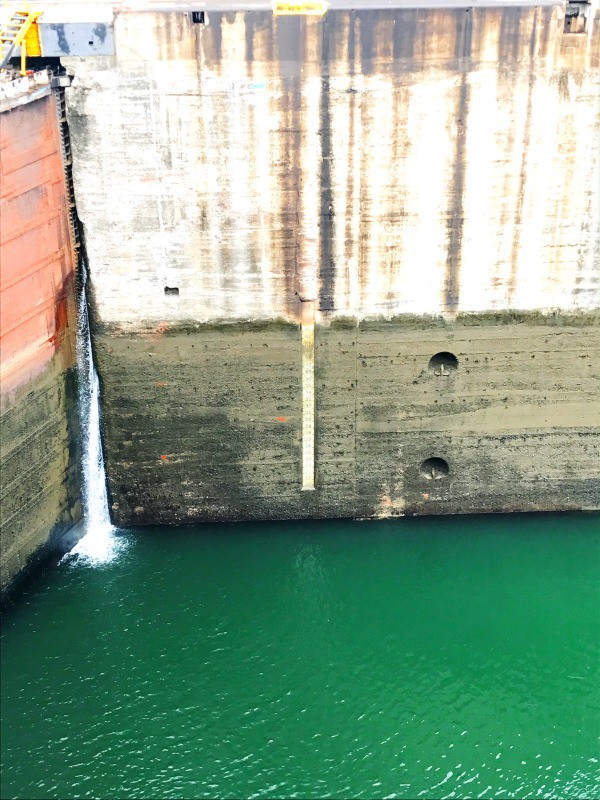 While I could write for pages about the history of the Panama Canal, I’m going to touch on just a few facts of the building of the canal and the transfer of the oversight of the canal from the U.S. to Panama in 1999. Below are just a few highlights.

Once our ship got through all of the locks, we continued to cruise to our next port: Colon, Panama. In Colon, my friend Erin {Dinner, Dishes and Desserts} signed up for an excursion to get a closer look at the locks, including driving through the new locks, walking in the rainforest, boating on Gatun Lake and visiting the city of Colon. 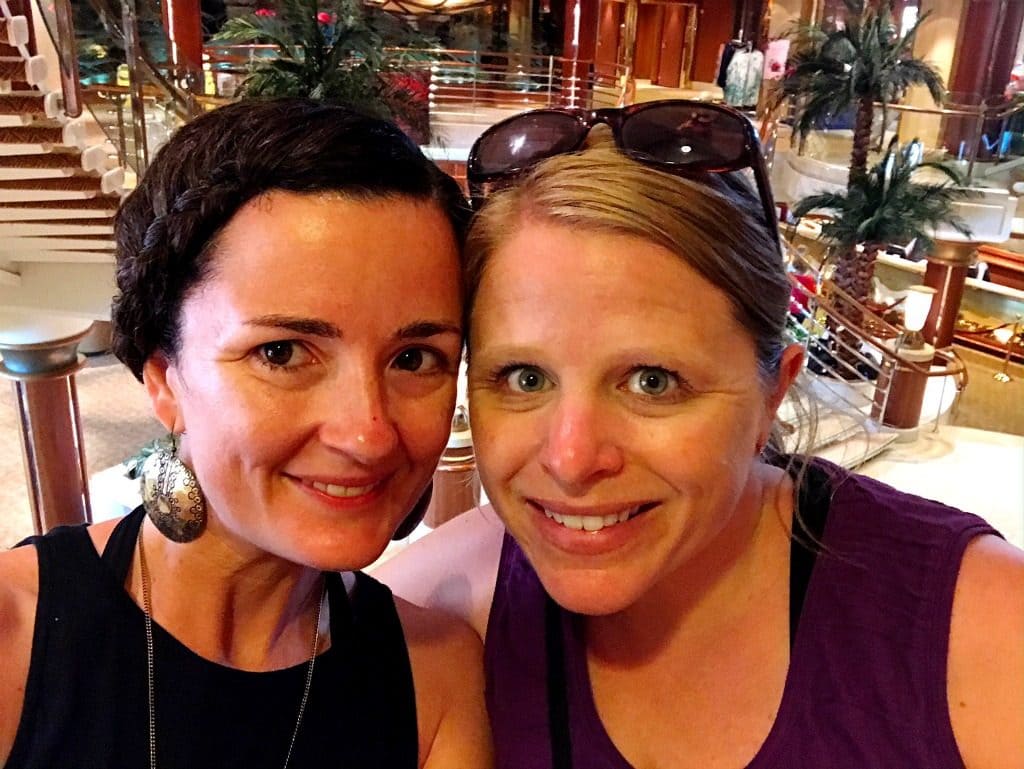 EXCURSION: CRUISE GATUN LAKE | DESCRIPTION: A jungle boat excursion through the dense rainforest highlights the abundance of exotic wildlife and breathtaking scenery found along this vital waterway, a key component of the Panama Canal’s intricate system. NOTE: Shore excursions may change. At the time I went, there were 8 excursions offered in Colon, Panama. 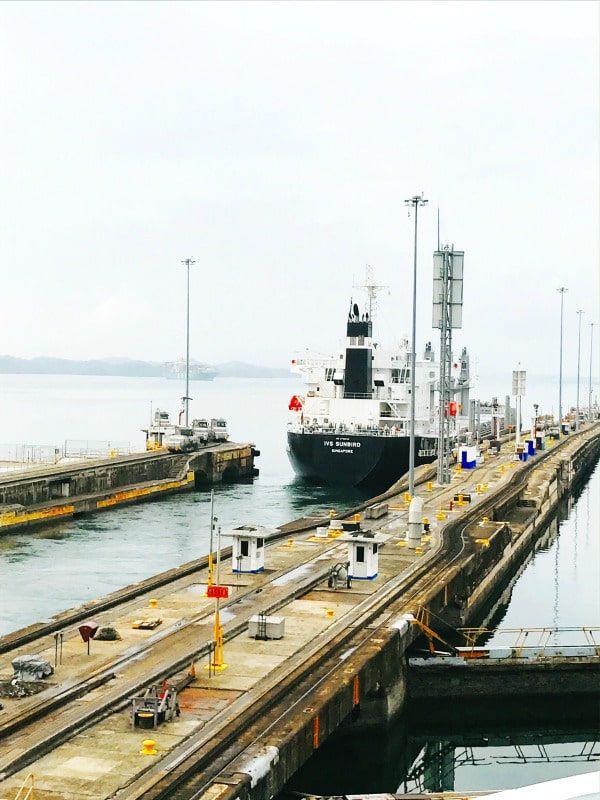 This excursion provided two highlights for me. First being the closer look at the older locks, especially the mule cars. The mules are used on each side of the ship and are used for brake control in the locks.  For large ships, like the Princess ship, there are two mules on each side at the bow and two on each side at the stern—eight in total, allowing for precise control of the ship. These were so cool – my boys would’ve loved seeing these mini-train cars. I was a little sad to hear these will not be used at the new locks; instead they will use technology provided by Dell to send signals to the ship that allow for precise control through the canal. 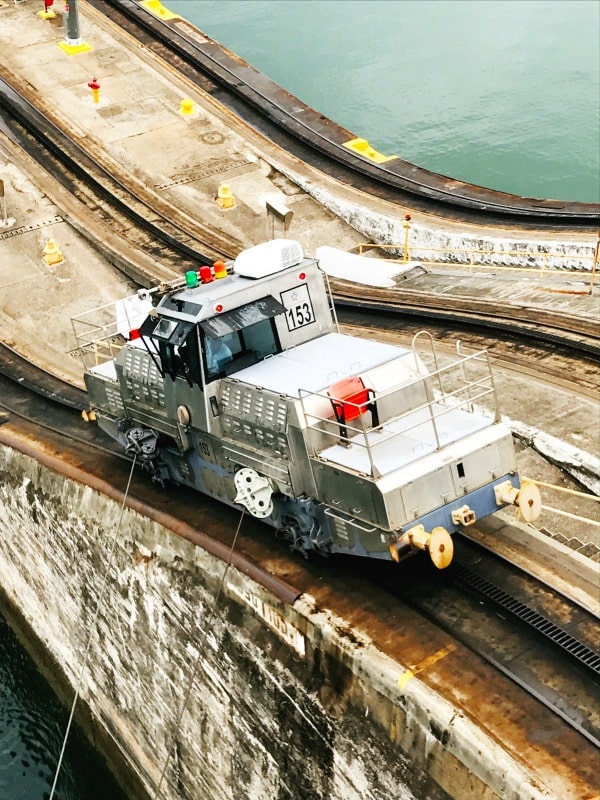 The second highlight was seeing all of the U.S. history just south of Colon where U.S. troops, engineers, canal workers and all of their families were stationed. It was a bit saddening though to see all of the old housing, barracks, training centers, schools and hospitals looking worn down and falling apart – literally falling apart. It looked like an old abandoned city, which it is. People just up and left, leaving behind these once gorgeous buildings, homes, and schools. Thankfully, some of the old barracks and hospitals are now being renovated and turned into resorts. Other places are being bought and renovated into homes for people who either once lived here and are returning or the Panamanian people who are now coming into these places and making lives here. 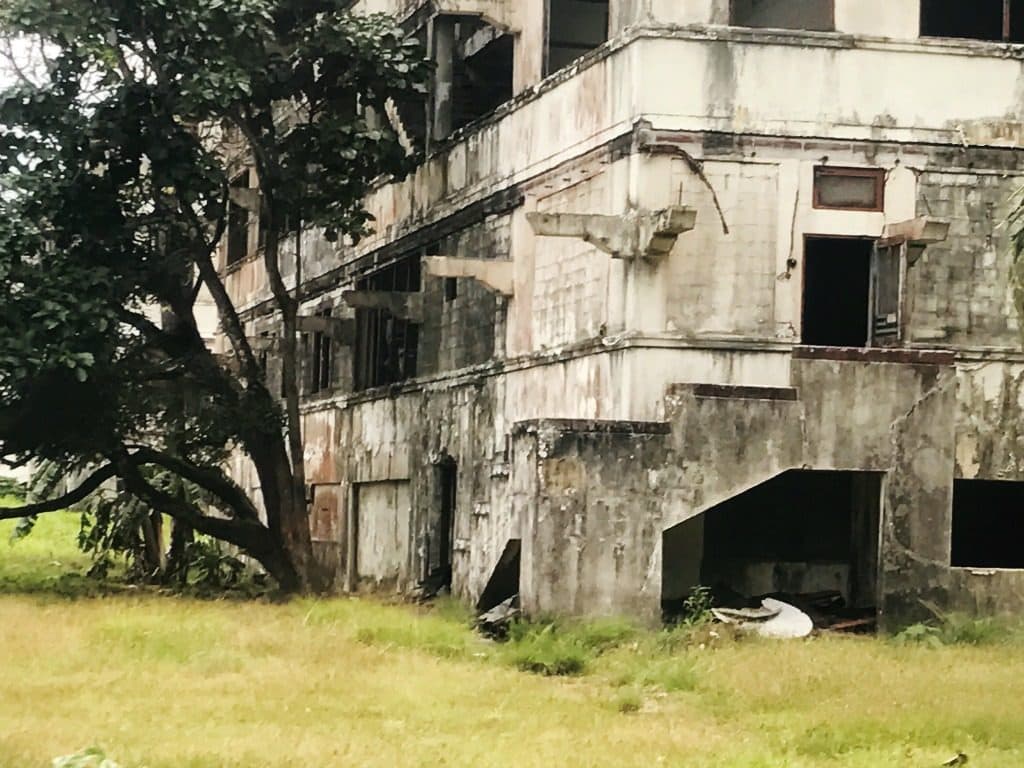 Our tour guide was amazing, sharing with us stories of the building of Lake Gatun, the U.S. military and their residences in Panama, and what life was like for not only the Panamanian people but the entire world as the canals were built. There is so much to learn from a world history perspective on the Panama Canals, and I came back with an eagerness to learn more of this part of our history and its influence of the world. The people behind the Panama Canal are true innovators. The canal captivated the world and played a vital role in trade and expansion. 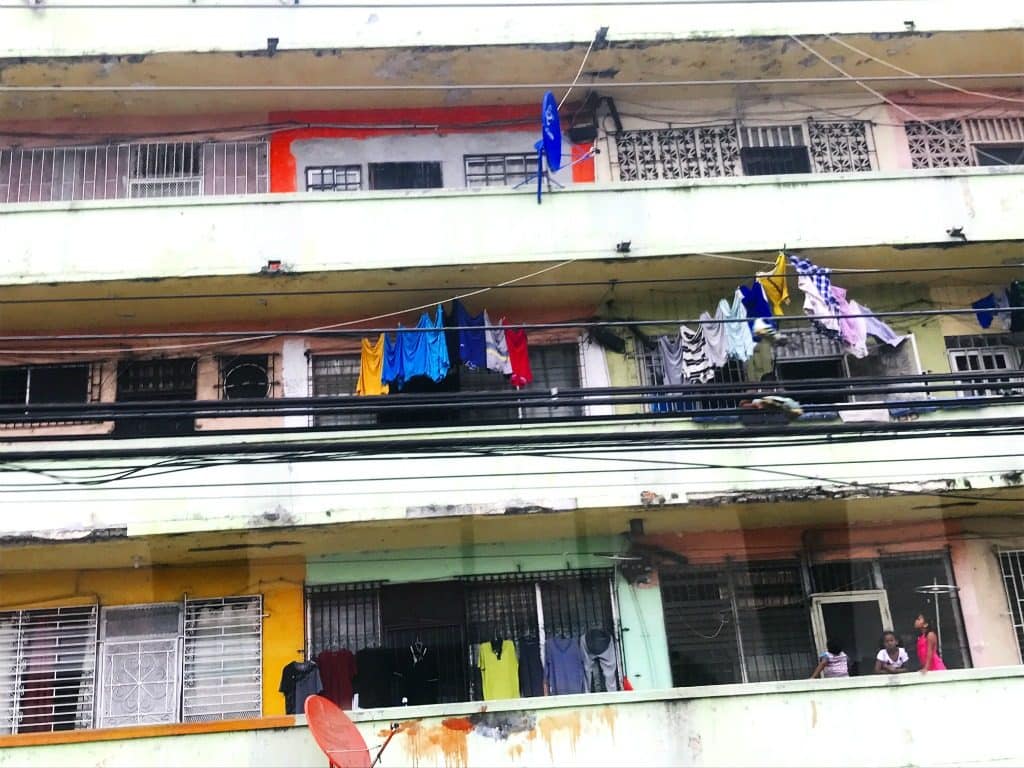 There was only one thing from the Colon, Panama stop that left an uneasy impression on my heart. And that was the city of Colon itself. The amount of poverty was something like I hadn’t see before. And it was evident everywhere. Our tour guide said that the unemployment rate in Colon was 37%. Our guide has his thoughts and facts as to why this was but regardless of the reasons it was hard to see. At one point you could tell that the port was once gorgeous and buzzed with life. But for now there were much homeless living in handmade shelters along the side of the road and what looked like an old abandoned building was actually full of people. This was eye-opening for me and gave me the realization of just how sheltered I am. 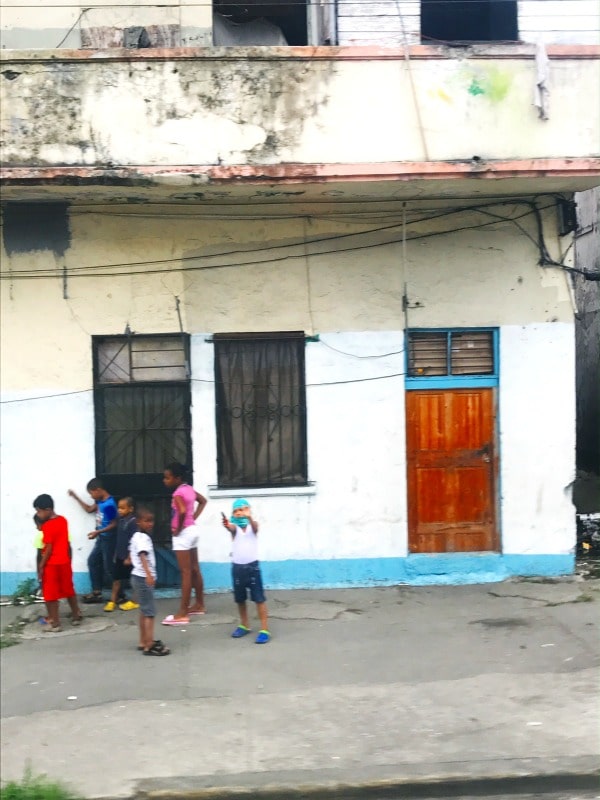 I am not only forever grateful to have been able to cruise through the Panama Canal and learn more of U.S. and world history, but also expand my mind and heart beyond just my country, my little section of the world, to something bigger and better.